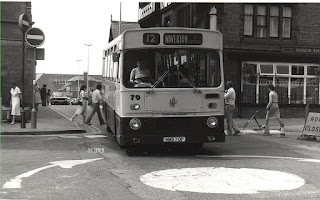 During the Seventies single-deck variety was a rarity because the market was geared towards the ubiquitous  Leyland National and bus grant service coaches. Most of the few other saloons went to the remaining municipals and bodywork included the Duple Dominent but both both East-Lancs and Northern Counties managed to pick up some business. With rather square NC bodywork was this short Leyland Leopard with Chester. City Transport and looking smart in the updated 'more cream'  traditional brown based livery.
Posted by christopher at 02:11