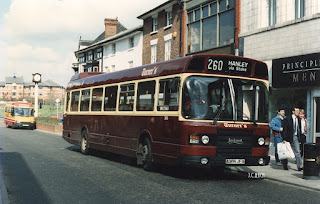 Sadly all the long established Independent bus companies have now gone from the Potteries and even PMT now part of First has barely one-hundred buses where once I remember there were over five-hundred. After PMT took over Turner of Brown Edge they retained the name and attractive livery for a time and it even appeared on Leyland National2 A306 JFA which was seen in Stafford where most people wouldn't know who Turner's were.
Posted by christopher at 01:20