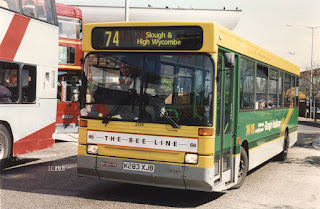 Firms like Thames Valley are just a distant memory now as is it's successor Alder Valley. Newbury went to Reading Transport and Aldershot and Guildford went to Stagecoach  but most of the Thames Valley area became The Bee Line under I think Len Wright. After the mini-bus craze it took operators a while to think big again and these short Darts with Plaxton Pointer bodies were the next step back up towards sensible large buses. Optare was very active at this time trying to catch the economy end of the market producing various innovative cheap buses from minis and midis to full-sized vehicles including double-deckers but it was the success of these fairly simple workmanlike Darts especially compared to it's from rival Volvo that saved Dennis and made it the success story it still is today.

Posted by christopher at 16:31