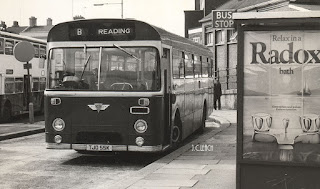 Chilton Queens base at Didcot was on the edge of City of Oxford's territory and it is from there that this interesting independent with a liking for AEC;s purchased this Marshall bodied Reliance. When the NBC told it's member companies that they had to buy just Nationals it really hurt bodybuilders like this and Willowbrook too who had relied on decent sized orders from within the BET Group. Oxford had been a part of that too and these might have been the last ones but it managed to get away without buying the dreaded National by having mostly Bristol VR deckers and turning to lightweight Fords for country services which were much more suited to their small ill-equipped garages. As for heavyweight coaches instead of AEC's Oxford bought Leyland Leopards as they became the NBC norm.
Posted by christopher at 16:51

Chiltern Queens was based at Woodcote in Oxfordshire, about half-way between Wallingford and Reading to the east of the River Thames. It reached Didcot with a bus route from Reading via Wallingford. Tom Tappin Ltd, a substantial coach operator which also ran one local bus route, had a depot in Didcot.

Thanks Philip,
this is not my neck of the woods and I'm sorry I thought Woodcote was very close to Didcot.