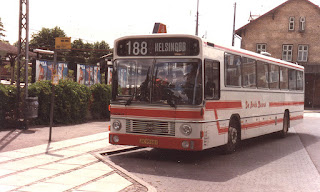 Denmark used to be awash with independent bus operators and this included within the Copenhagen area where some were quite big. Those the biggest however found themselves taken over by HT their 'PTE' but others remained with a decent sized fleet of buses. Hvide Busser was an example of this and it ran some AEC's when I first visited it in 1982 but by the time I took this they were running newer more normal Volvo B10M's like this example at Klampenborg Station.  Often operators were known by the colour of it's buses and hvide is as you can probably guess white.
Posted by christopher at 01:15

?I was very happy to seek out this net-site.I wished to thanks for your time for this excellent read!! I definitely having fun with each little bit of it and I have you bookmarked to take a look at new stuff you weblog post. casino real money

Oh my goodness! a tremendous article dude. Thanks Nevertheless I'm experiencing concern with ur rss . Don’t know why Unable to subscribe to it. Is there anybody getting similar rss downside? Anybody who knows kindly respond. Thnkx play casino