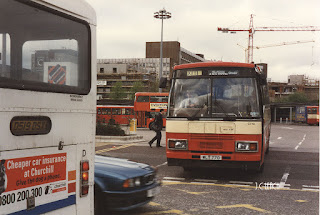 As in England the Scottish Bus Group was broken up into smaller companies so that they could be more easily be sold off. The excuse being that it would help open the market up to competition but sadly the strongest not only survived and prospered they now have such a strong foothold they just don't care too much about giving a proper service any more. In the days of the BET Group the good urban areas used to help subsidide the country routes but now they make as much as the can in the big cities and make the local authorities pay for the country routes if they want them. Clydeside which was part of Western Scottish looked scruffy by comparison including this demoted Plaxton bodied Leyland Tiger which had gained the registration off a London Routemaster which came up here.
Posted by christopher at 01:12

The myriad of names and liveries got quite confusing at this period. It's neither Clydeside nor Western, but Kelvin Central - Hillhouse being a destination in Lanarkshire rather than Renfrewshire or Ayrshire. Also, RM770 went to Kelvin rather than Clydeside.

A little googling later says the bus was once United Counties NBD 106Y, later passing to Luton & District. In fact, I think it may be in L&D livery rather than (Kelvin) Central - seen on the buses in the background

As ever, fascinating to see a reminder of the past - plus your pictures always manage to evoke the atmosphere of the time. Thank you for sharing them with us.

I'm glad your enjoyment of my photography makes up for some of my errors. The trouble is if I reasearched them all it would take me an hour to do each one when it should only take five minutes, and as you say there was a lot to follow which of course at least made them interesting times.