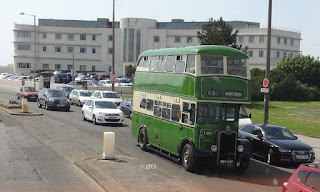 Blackpool with it's tacky bling might still have it's tower which can be seen from miles away but even humble Morecambe has it's architectural treasure the magnificent Art-Deco Midland Hotel. Having just passed it on the recent Ribble Enthusiasts Running Day was this Blackburn Guy with Crossley bodywork which had been restored to original condition. When built in 1949 this Manchester  streamlined styling was considered state of the art in some town halls especially after the austere wartime utility buses but it looked rather ugly on this Arab111 especially as it's over decorative lining-out belonged in the past on the old tramcars it replaced.
Posted by christopher at 02:52

For me it's those small windows at different levels which completely ruin the design; I've been turned off long before I even start noticing the details of the livery!

Yes Ross I think it is ugly anyway as well and not helped by the overhang below the cab window.

Well I love it. Which is a good job, since I own it!