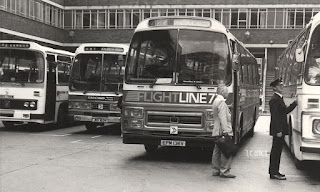 A gentleman needing assistance patiently waits for the Victoria Coach Station Inspector to finish giving instructions to a driver of most probably a Duple Dominant bodied Leyland Leopard. By this time the AEC Reliance was getting rare within the NBC empire but in the south East Kent, National Travel SE (Formerly Timpsons) and London Country had some late examples as can be seen here EPM 136V dated from 1979 and had a Plaxton body and was used as seen on the 777 Flightline Express to Gatwick.
Posted by christopher at 14:43