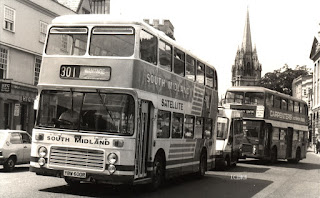 I suppose one could argue that at least there was some logic in selling off the big sprawling NBC companies like United and Ribble in chunks but some of their actions were just cynical. How could the unremunative Oxford country area buses without the cross-subsidy make a living when they became a separate company from the main city fleet and this was not helped as it was also without proper facilities as all it's depots were small.  I can only see it as with the loss making country area removed the accountants saw bustling Oxford as as a big juicy financial cherry to be picked and splitting them up would make the most money for the Tory Coffers. Poor old rural South Midland as it was named could be sold off as a loss leader and it didn't matter if it went bankrupt. Of course the reasoning behind it was supposed to be that the new company would also need to compete on busy city services with CMOS.  However competition is costly and wasteful and with stretched resources the country services it inherited would get neglected and it is this unsatisfactory legacy of Deregulation we live with today as buses became just about profit and not service any more. After the sell-off CMOS carried on pretty well as before still in NBC poppy red for a time but South Midland introduced a confident rather striking livery to show that it wasn't going to give up and made headway taking a share of the busy London services with it's imaginatively marketed Oxford Tube too. In the end it was bought out by Stagecoach.
Posted by christopher at 16:58

You've actually got all three of the deregulation era actors in Oxford in that one shot, as the two VRs are sandwiching a Thames Transit minibus.

Thames Transit was introduced by Harry Blundred of Devon General who believed in minibuses in a way that only an evangelist could have done; in Oxford he carved a niche becoming successful enough that he could buy out South Midland (doing so long before Stagecoach came onto the scene) and turned the country bus routes into tortuous breadvan trips. In Portsmouth he took on and successfully destroyed Portsmouth City Transport, and in London his Docklands Transit operation didn't seem to be loved quite as much as he'd expected, fairly rapidly failed as a commercial operation, ended up operating LRT (TfL) tenders, and possibly was the reason that Blundred started to lose interest in playing minibuses.

In the end Blundred sold out to Stagecoach around 1996-97, and that's how Stagecoach got their hands on South Midland. (Stagecoach Oxfordshire is still today legally known as Thames Transit Ltd).

Before the Blundred takeover, South Midland used a number of different liveries, initially choosing a rather staid maroon-and-cream variation of NBC livery before moving on to the brash one you pictured with its dayglow green and dark blue stripes and "local" names such as Satellite and Orbiter which I believe were depot identities, and an even more dayglow general livery.
They called themselves "South Midland - The Countrybusmen" for a time, but never really had chance to make their mark post-deregulation. It's interesting to ponder on how they would have survived had Thames Transit not bought them out; some of "rural" Oxfordshire isn't all that bad as bus territory compared to (say) rural Lincolnshire or North Yorkshire, and Stagecoach have certainly made a pretty good go of it in the past couple of decades.

Anonymous above was me...!
Ross

p.s. the Oxford Tube wasn't South Midland, who had no coach operations. When COMS (Oxford South Midland) was split to satisfy Nicholas Ridley, the coaching side stayed with City of Oxford which was rather ironic given that traditionally COMS was purely a bus company and South Midland was a coach company.

Anyway, Oxford Tube was another one of Blundred's Thames Transit operations. It's surprising that he didn't use minibuses on that too!
There was some absolutely ridiculous competition on the Oxford-London motorway route during the 1990s, with at one point coaches running on a load-and-go basis rather than to a timetable and fares so low that it was almost cheaper to go from Oxford to London than it was from one of Oxford's estates to the city centre to catch the London coach...

You informative additional material shows how hard it is to write decent captions without getting something wrong or leaving something out. I'm sure if someone were to do a university degree in public transport the COMS saga would be a worthwhile study.

I think I read somewhere that Blundred was planning to put mini-buses on the Oxford-London service!

You made a good point, Oxforshire might be quite rural but it quite well populated and distances between settlements are not too great.

I think the poor chap died (RIP) but with his tunnel-vision and ability to only think small it's a good job Harry Blundred didn't go into politics as they might have put him in charge of BREXIT.