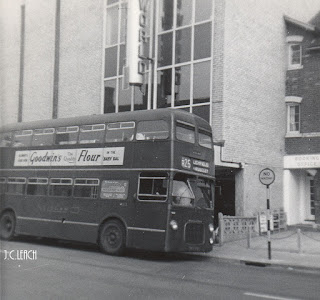 Some things just about manage to stay the same but there is almost nothing left of the old Midland Red in Stafford apart from I expect a few concrete bus stop poles. But one enduring feature is a number of local bus services which still use the old BMMO area 8** format. Indeed as seen on one of the town's two famous D10's 4943, the 825 went to Lichfield via Rugeley and it still does today.  However the passage of time doesn't always make things better and the 825 takes a much longer route to Lichfield than it did in 1964 taking about an hour whereas today it takes half as much again. Perhaps one good thing is the Arriva Wright bodied Volvos are a lot warmer than a the old BMMO's which were rarely warm enough in winter and yes the old buses rattled too especially the glass sliders but even they weren't as bad as 'rattle-box' modern buses. Of interest of course is The Top of The World ballroom opened in the town by businessman Harry Fenton. Young people would come here from miles around to dance and enjoy the entertainment but he had a strict door policy of no long hair on men. If they really wanted to come in a barber was provided on site but I don't know if they charged extra for a good haircut.
Posted by christopher at 04:33