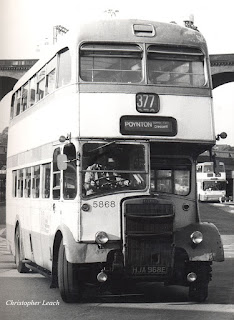 By this time in early Eighties these Leyland  PD2's and PD3's at Stockport and another clutch at Wigan became some of the very few half-cab buses left in Greater Manchester. Of course looking old-fashioned they seemed a bit of anachronism alongside Atlanteans, Fleetlines and even the advanced MCW Metropolitan but these at Stockport bodied by East Lancs  looked so elegant and had character missing in a modern fleet. I lost a lot of interest in the Seventies as I hated the NBC livery and the PTE's which seemed to make buses less attractive, however it was partly to catch the last of these dying beasts on film which drew me back into the hobby.
Posted by christopher at 00:56