Trying the Dennis Dominator in Southmpton A277 ROW 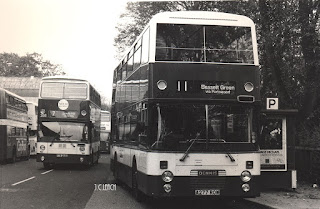 The first generation Atlanteans were troublesome especially compared to the tradition half-cab bus. Perhaps operators had got used to it to a certain extent and the the improved AN68 version from Leyland was certainly good enough to boast a strong following including the Municipal fleets along the South Coast. When it was axed it caused quite a quandary as Municipals in particular didn't like change and with good reason preferred the tried and tested to the new. Leyland's replacement for the Atlantean the Olympian was tried along with Dennis Dominators like this. Sadly the threat of Deregulation killed off the big bus market and the mini-bus boom so nothing was really clear any more. As at Plymouth it's non-standard Olympians were soon sold off but more Leylands appeared in the shape of the new Lynx which had it's fair share of faults.
Posted by christopher at 00:28