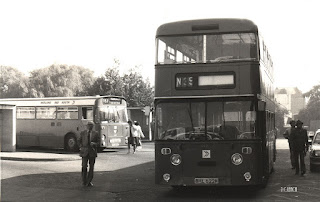 Under NBC management Midland Red was allowed Leopards too but it had to take more than it's fair shares of new Leyland Nationals. Consequently without any orders double-deckers became rather thin on the ground and so in later years after it was split up the new companies had to top up with second-hand buses like this former West Riding Northern Counties bodied Daimler Fleetline in Nuneaton on a town srvice with Midland Red South.
Posted by christopher at 04:05