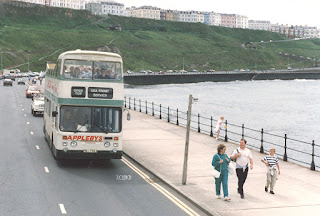 The open-top seaside double-decker going along the prom is a long established British tradition. Of course as well usefullness the scenery adds to it's appeal and in this respect the more traditional and breezy Scarborough must be one of the best. When I was there in the Nineties East-Yorkshire and Appleby's which had expanded following deregulation northwards from it's Lincolnshire roots was busy competing for custom. As well as operating this Park Royal bodied Daimler Fleetline which started life with Sheffield Corporation as No.700 Appleby's also had it's Southdown Queen Mary PD3 out as well.
Posted by christopher at 17:25