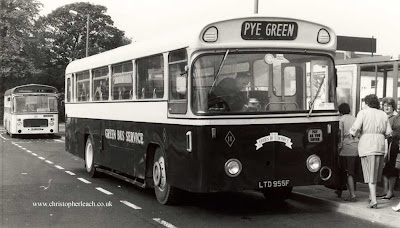 Warstone's of Great Wyrley in Staffordshire had a reputation amongst the bus enthusiast fraternity for operating a fascinating fleet of elderly vehicles in a beautifully turned out traditional livery. Most of the vehicles came from the smaller Municipal fleets and were Leylands whether they be half-cab PD3's or Atlanteans or more typically East Lancs bodied Leopards like this former Rossendale bus. Behind is similar bodywork on a Bristol RE chassis and still in Halton (Widnes) red and cream colours and belonging to the four vehicle concern of Pedley from Hammerwich which were used on culled Midland Red services here in Cannock and at Tamworth. Today a slimmed-down Warstone still operates but most Mercedes mini-buses.
Posted by christopher at 01:26