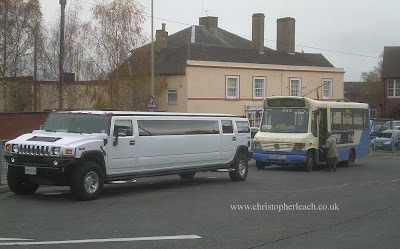 Well at least this one with it's high wheelbase won't get grounded but I hate them, maybe it's because everything big and trashy comes from America, but more to the point if I wanted to arrive in style I would much rather alight from a Rolls-Royce with some dignity. This monsterous creation had turned up at Uttoxeter for the horse racing earlier this year. In the background is a Mercedes of D&G one of the smaller companies that like Stevenson's did has expanded rapidly taking up the work that the big groups like First Group doesn't want to fight for in marginal areas like rural Staffordshire.
Posted by christopher at 01:59

I couldn't agree with you more on the lack of style and taste. But then I suppose people like you or I would charter a vintage bus if we really wanted to arrive in style?

Andrew I'm sure we would, a nice yellow post bus or a Harrington Cavalier.