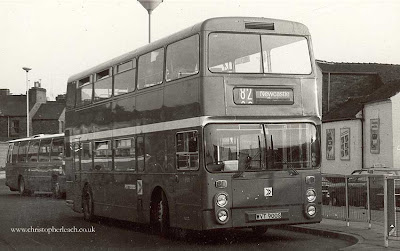 From 1959 PMT ran an old Massey bodied half-cab Foden PVDG6 it acquired with the business of W.S Rowbotham on it's old run the steep route up local landmark Mow Cop from it's base at Biddulph Garage. That bus dating from 1952 was No.H812 and many years later in 1978 PMT acquired a brand new Foden as the Potteries with it's hilly demanding operating territory was deemed an ideal area to test the durability of some current designs alongside the tried and tested. An Alexander bodied Dennis No.700 was also set to work in the area but this Northern Counties bus No.900 is the best remembered. I think efforts were made to preserve it which would have been worthwhile as only eight of these trial buses were built as the local truck maker from nearby Sandbach tried to re-enter the Leyland Group dominated bus market at the end of the Seventies.
Posted by christopher at 11:23