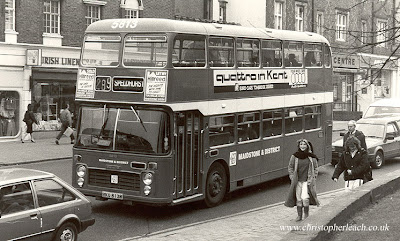 Eastern Coachworks discontinued these cream coloured window gaskets shortly after this Maidstone and District Bristol VR No.5813 was built in 1974 because they didn't look very nice. But to the contrary in an era that shunned proper liveries it did much to cheer those almost unrelieved bland poppy-reds and leaf-greens. I think it was one winter afternoon in about 1983 that I took this rather pleasing view of smiling people and litter-free streets in affluent Kent.
Posted by christopher at 11:29

An evocative photo of a time that wasn't too long ago yet now seems so distant. Without wanting to get too nostaligic, in a way this photo seems to bring back so much of what was good of the England of old, and that is now largely lost. Neat shops, probably family run businesses, well-kept Victorian buildings, an orderly street scene.

I would have asked any other photographer whether they'd noticed that incredibly warm smile on the girl's face. But seeing you are Christopher Leach such a question is definitely superfluous.

Oh yes Andrew of course I did appreciate her smile, and I hardly seem to notice that the bus is not in proper Green and Cream M & D colours and not a proper bus like a Leyland or AEC. Indeed Number 13 was not unlucky for me on this occasion.