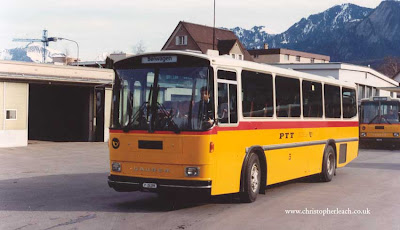 This bus of 1978 was the first of a whole generation of these rather idiosyncratic Saurer RH buses in the PTT Regie Post Bus fleet. The bodywork orders were shared out between the various Swiss bodybuilders and even though this one was by Hess I doubt if anyone could tell them apart. P24199 was seen at it's depot of Chur in the Nineties where it spent most if not all of it's life. However by the mid-Nineties it was transferred to the museum fleet following withdrawal from there but sadly it was broken up at Bern and one of the better condition final batch of 1985 buses from Sion preserved by the company instead. At one time a Post Bus Museum was planned to be built at Meiringen right in the heart of Switzerland but with the more cost conscious climate following Privatization there seemed to be a lack of interest in preserving the good old days. Now still stored in a warehouse I expect no doubt they will get around to it as not only is Transport something the Swiss have always done well those yellow mountain buses are even more Swiss than that cheese with the holes in it.
Posted by christopher at 15:22