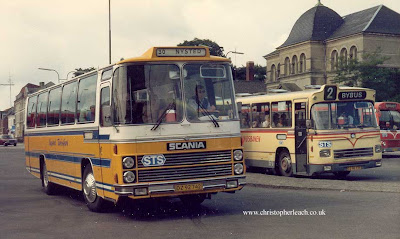 The small town of Nykoping with it's typical Danish railway station on the island of Lolland provides rather a good backdrop for this rather attractive Scania carrying the name of that even smaller town's local Independent heading home to Nysted not far away. It has attractive bodywork named after the town where they were built called Ringsted. Also at work is a Leyland based 1970's DAB town bus which is probably owned by the local railway company like the ubiquitous later red liveried Aabenraa Volvo all working happily together under the umbrella of STS the local area transport authority.
Posted by christopher at 07:55