A little reminder of the real Midland Red 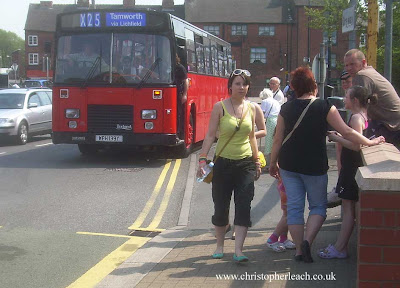 The transition from Midland Red North to Arriva today had been full of twists and turns which have been reflected in the numerous liveries worn by the buses. Since the fleet lost that NBC poppy-red it has not been the predominant colour but at one point under General Manager Chris Hilditch it was decided to restyle the whole fleet on the legendary Midland Red of old when BMMO buses were almost all-red with gold lining-out and DP's and coaches had black tops. It didn't go well as firstly they bought a poor quality darker red paint which soon looked shabby and the effect was ruined by those unsympathetic blue destination blinds. Although similar examples had it former Stafford rebodied Tiger bus No. 1719 rebodied by East Lancs never had a black roof but the enthusiasts who bought it added one all the same. This view was taken in Stone when the bus was doing a free bus service as part of the POTS Barlaston Rally in 2008. Sadly it was not there this year and the fact that I saw it heading north up the M6 motorway on trade-plates a few weeks ago strongly suggests that it has had to be sold but hopefully not for breaking.
Posted by christopher at 08:26