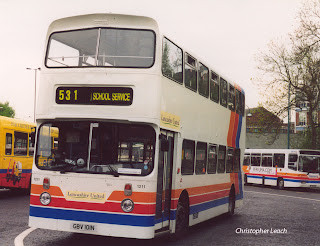 An interesting time to visit Blackburn was in about 1999-2000 when as part of the deal when selling it's under-performing  local East Lancashire area services to newly formed Lancashire United an extra amount of elderly vehicles were included which their new operator planned to replace. Most were former NBC Ribble stock but more unusual was this rather elderly former Preston Atlantean from 1975 which had been ancient by Stagecoach standards.
Posted by christopher at 07:41