Bern and the musings of Robert Jowitt 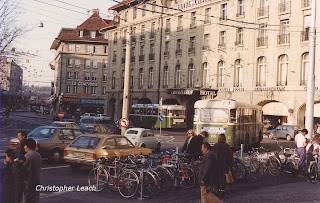 In Bern they used to keep the older buses for peak hour running only but on this occasion at the end of February it was still light enough before evening set in to get a photo of a pair of venerable old FBWs. Indeed this was the early 90's and well-laden No.118 dated from 1959. Even though there is nothing blatant this image has a strong Robert Jowitt feel and in one of his writings even though it might have been said in a witty self-effacing way he commented that he had stayed at the imposing Hotel Schweizerhof

Posted by christopher at 02:25