Missed it: On Never Mind Another 1000 Coming Along 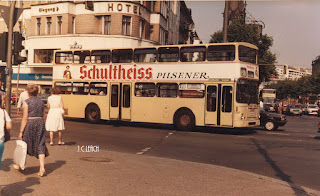 Very much of their time and after they had all been delivered in 1984 these MAN-Bussing and later MAN double deckers very much dominated the West Berlin BVG bus fleet. Deliveries started in 1974 and it accumulated well over a thousand of them (1090). But at least their rather bland appearance suited the similar post-war architecture around the Ku-dam. 2893 of 1977 was heading for Britz coming from the main Zoo Bahnhof terminus nearby and the 73 was one of any number of long bus routes one could enjoy in those days.
Posted by christopher at 07:24

Hi,
it nice to see pictures of the "old" West-Berlin BVG buses. but there were "just" 956 SD200 for the BVG. Eight other buses for the LVG Lübeck and i think four buses for Zurich. Please more of these pictures =)

Thank you BVG obviously I made a mistake with my calculations. I remenber the LVG examples as well for I went there hoping to tape-record the earlier generation Bussings which outlived the Berlin examples and had a good day out although believe it or not the school kids on there even managed to drown out the noise of those 'rocket powered' buses.