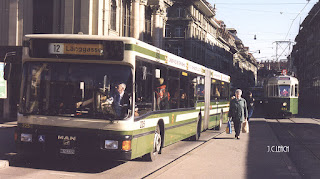 Bright sunlight can cause all sorts of problems particularly in winter but I see it more as a challenge than anything else for whenever possible I like to portray what's there for that is what we see and there is no right or wrong way to take a photo, jut some are better than others. By the end of the Nineties Bern had a large number of new modern articulated buses that replaced the old FBW's mainly from from the Sixties and coming up alongside No.226 was one of the then oldest and last of the boggie trams. I used to go to Switzerland for a week in about February and despite having the charming small capital Bern as my base I didn't get much chance to take photos as I was rushing for trains after breakfast and it was dark when I got back. However I had a friend who worked for the Post Office (PTT) at the offices and bus works and as well as visiting him I had a few hours to spare here.
Posted by christopher at 03:28

I remember articulated seeing buses in Lucerne in late 1990, doing well on the curved streets. We had them in London for several years on newly created routes, 436 and 473. They didn't handle well on London's essentially square street system. The drivers needed to pull over into the opposite lane to negotiate right angle corners, so blocking traffic. They were phased out in the last three years or so.

I remember seeing articulated buses in Lucerne in late 1990, doing well on the curved streets. We had them in London for several years on newly created routes, 436 and 473. They didn't handle well on London's essentially square street system. The drivers needed to pull over into the opposite lane to negotiate right angle corners, so blocking traffic. They were phased out in the last three years or so.

London drivers are too hungry for space too and will steal it regardless of whether it holds up the traffic or not. Of course they don't normally have deckers on the Continent and articulated buses are their equivalent and so common as to be unremarkable except to us Brits.