Three Varieties of Orange in Manchester 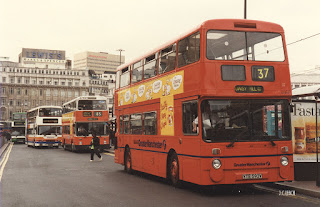 Well it was about 1999 or 2000 here at Piccadilly Bus Station in Manchester as the former Greater Manchester North and south fleets became absorbed by their new owners from the major groups. The NC bodied Daimler Fleetline of GMN from Atherton Garage had been part of Lancashire United, whilst behind it is a similar bodied bus but this time it was an Atlantean of GMS which was now with Stagecoach who had enriched the fleet with their typical striped Alexander bodied Volvo Olympians which arrived new. Bringing up the rear was another NC bodied example this time I think a DAF of Wall's another operator whose smart fleet would soon to pass to Stagecoach as well.
Posted by christopher at 08:13

Whoever came up with the name "tomato soup" for that First livery certainly nailed it.

I wonder why FirstGroup always seems to manage to come up with such uninspiring liveries? They even managed to make that bright orangey-red colour feel boring and even slightly depressing.

The manager came down from Glasgow and bought a few cans of that tomato soup colour with him. I agree with you about First though as the new effort isn't really an improvement of 'Barbi' but at least it includes local branding I suppose.

That local branding is another example of First not quite getting it right.

On paper it looks great: local names with silhouettes of the local skyline in the letters - but it doesn't work on the buses themselves.

The blocky typeface is simply wrong in an era where clean, crisp sans-serif text is preferred and then there's no attempt made anywhere to explain the images used, so because people don't know what it's supposed to be it just looks messy.

How can they consistently get things so wrong?

That's not to say I think much of the other big groups, and don't get me started on the "really good bus company" that calls itself trentbarton!