Something Missing From The Lynx! WMT C66HOM 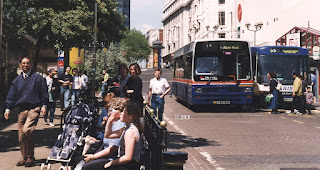 One of many West Midlands 1066 was one of the trial batch of Leyland Lynx buses tested alongside some Volvo Alexander P-Series B10M's. And yes had they chosen the Optare Delta like Claribel that would have been the better choice too. Once Leyland was a great British brand name famed arond the world for ruggedness and reliability but under government ownership as part of BL along with other setbacks little was spent on development and research on the bus side. I was against it as I'm afraid Brexit won't bring any of these once great names back or help to keep what's left we're stuffed I'm afraid because it won't work!
Posted by christopher at 16:10