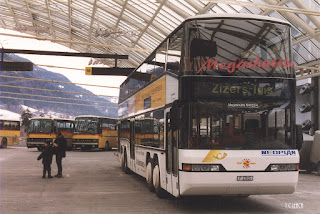 They talk about the end of the line but when it comes to railways that really happens at Chur for the normal gauge railway lines which go right across much of Europe finish here and it's just bus or narrow gauge from here southwards through the mountain passes towards Italy. The post buses used to terminate on the forecourt outside the station which which was a lot more picturesque than the new bus station but being right at the end of the platforms it makes transfers so much easier. The biggest fault I found with it was in bad weather like a blizzard the roof acts as a wind tunnel and it flies everywhere. By the time I took this only the odd Saurer remained with Die Poste here and it was very much Setra and the Neoplan to be found here like this doudle-decker taking skiers to the resort of Zizers.
Posted by christopher at 00:24