YTJ 627D: A former Leigh Renown and an LUT Guy 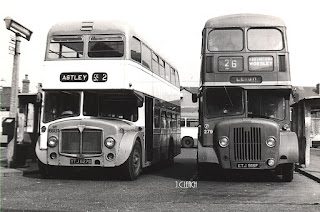 During the school hoildays in the Sixties as a family we often went to Manchester for the day did our own thing and met up again at about Four to go home before the rush hour. Once I had seen most of the Manchesrer buses I tended to go out on the buses to nearby towns like Bolton, Warrington and Wigan but somehow Leigh must have seemed a bit too small. So I have no older photos in he town than this one of 1980 but even though the LUT NC bodied Guy Arab looks as imposing as ever the former Corporation East Lancs bodied AEC renown looks like it's been put on the bargain shelf like many other buses in that era that doned 'imposed liveries' that didn't suit their pedigree and had their embellishments removed in the rush to out-shop them back onto the street. At least the Lancashire United Guy nor any of it's many sisters ever had to suffer that indignity when LUT too which was already partly owned eventually passed to Greater Manchester.
Posted by christopher at 03:28