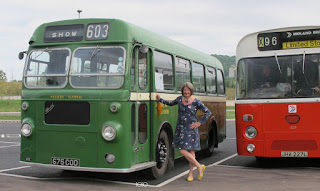 Bus enthusiasts tastes depend on where and when they they were brought up. I grew up alongside the mighty Midland Red and had plenty of exposure to other nearby BET fleets with their Leylans, AEC's, Atlanteans and Harringtons. So the Nationalised BTC empire with it's rather monotonous standardised fleet of ECW Bristols was not only a bit alien to me they were dull. But like anything else get a bit of exposure to something and the niceties start to show. So I have ended up liking some of them quite a bit and probably Southern/Western National who also owned Royal Blue is probably my favorite. Not only was this one of the Tilling concerns with huge operating areas it ran a more varied fleet than a lot of them including a whole load of SULA4's including coaches. On a bus trip last year I was telling my friends I had never been on a single Albion Nimbus and nor I had never been on the small four-cylinder Albion powered Bristol and sure enough five minutes later one phutting away merrily pulled up alongside us. I suppose I could have asked for a ride to Bristol but as well as taking an extra slow half-an-hour plodding embarrassingly down the M5 was hardly a breeze across Dartmoor.
Posted by christopher at 04:23