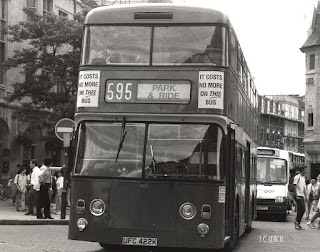 Once the half-cabs had gone I  particularly wanted to photograph the survivors from the past such as this Northern Counties bodied Daimler Fleetline, a type more typical than the NBC stock and a vehicle which once wore the City of Oxford duck-egg blue and maroon. Cities like Oxford and York weren't built for the car and couldn't benifit from Post War rebuilding either to make inner-city ring-roads and build big central ugly multi-storey car parks. Of course that's a good thing and especially so when it enourages visitors to come but use the Park and Ride services. Normally it is new types which get branded for this sort of work but it's nice when the oldies help out too. Perhaps being a bit antiquated they were unpopular with 'opo' crews and at least doing the Park and Ride wass more of a doddle with fewer stops and simple ticketing.
Posted by christopher at 02:12