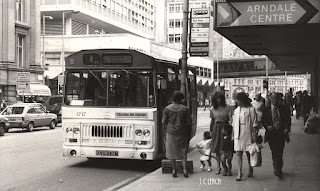 A familiar sight around Manchester City Centre in the Seventies and Eighties was the fleet of Seddon IV midibuses which did the No.4 Centreline service which served both Piccadilly and Victoria stations.  If I think the fare was just 12p today one wouldn't worry to much if they didn't quite have the right fare and paid too much.
Posted by christopher at 14:45