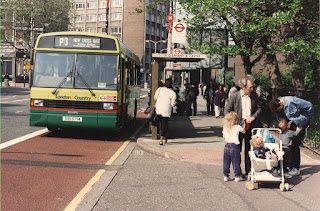 The Drawline group included East Lancashire Coachbuilders and so not surprisingly they were given the contact to body many of the buses. Most memorable was perhaps the National Greenway which was a stripped down National Mark1 and rebuilt as a new bus and now featuring the still popular but shortly to disappear old fashioned big Gardner engine. I think the London and Country version of the 'house livery' was the most attractive as seen on this bus at the Elephant and Castle south of the Thames..
Posted by christopher at 15:34