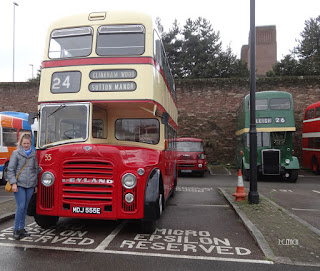 For me it doesn't get any better than this as my love of buses is for the more traditional. But that was my era including my formative years and others who were born much later have just as much right to rave over Dennis Darts and First Barbi. You have to admit though that in some respects dreary towns like St Helens showed bucket loads of Civic Pride and in this instance looked particularly colourful with it's red and cream buses. Salford was another good example as one knew they were no longer in Manchester who also used red and as for the Warrington bus next to it that was a Foden which illustrates rarity and  variety to be enjoyed in those days.
Posted by christopher at 01:25