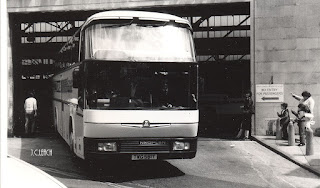 One of the most greatly missed operators from the Deregulation era is Yelloways of Rochale famous for it's distinctive yellow and orange and when they were still available AEC reliance coaches. After it's sale the name was retained for a while but in a way it was a pity they did as it was asset-stripped by S.U.T and became just another here today gone tomorrow company even running old second-hand buses in the Manchester area.  Most of the remaining express coaches took on NBC white like this replacement Neoplan in Rapide livery leaving Bristol.
Posted by christopher at 04:37