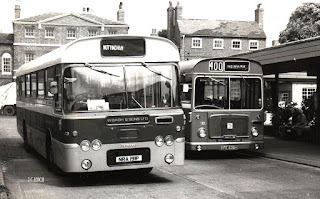 Even though Lincolnshire had a garage beside the bus station when one thinks of Newark on Trent they think of the much more interesting W,Gash and Sons, one of a number of fine traditional Independents that ran into Nottingham. These services even in later years were able to justify the purchase of new buses a process encouraged due to the availability of the government bus grant in the Seventies. Daimler half-cab double-deckers had been the choice in the Fifties but the Leyland Leopard came afterwards and as long as they did service work to qualify for the grant they could also be fitted with coach seats and be used for that too. In the difficult times the industry has had to endure since Deregulation how these smaller operators would have appreciated that kind of support and good well known firms like Gash might just have survived.
Posted by christopher at 02:59