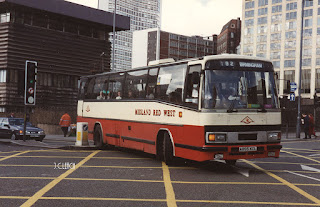 Some of First's liveries before the Barbi Years were pretty awful like First Bradford but others weren't bad at all. Midland Red West bus stayed true to the Midland Red brand but made the buses look individual enough not to be mistaken for the NBC or the old Midland Red. With lots of long trunk routes into Birmingham coaches were popular here and a Leyland Tiger formerly with Ambassador comes into Birmingham on the 192 another reminder of the old Midland Red which stil went  to Ludlow via Kidderminster and which once could also boast Leylands as both Ludlow and Kidderminster had the Leylnd PD2/20 LD8 class also chosen to do longer routes.
Posted by christopher at 01:02