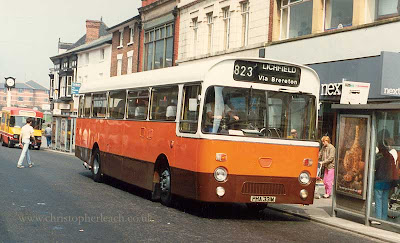 Interesting Independent operators are still sadly disappearing and the latest one in my area is Chase Coaches of Burntwood who became notable in recent times for it's large fleet of elderly Leyland National Mark1 buses. It was one of many companies that expanded rapidly following deregulation in the Early Eighties and it's early fleet included Leyland Leopards. Then recently privatised the new management of Midland Red North seemed interested in selling off the company assets especially the best buses like this example and it's not surprising that Midland Red crews scoffed at not only having lost their prized two-pedel Mashall bodied dual-purpose Leopards to the competition they were still running on their routes complete with Midland Red blinds. Midland Red North now part of Arriva, that company has bought out Chase Coaches and is still operating a few of the acquired buses.
Posted by christopher at 09:04