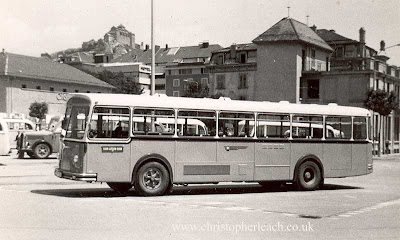 Although there were even things like modern articulated buses and trolleybuses in cities like Bern and Geneva once one ventured into the wilder cantons and mountains they quickly discovered that the traditional bonneted Swiss buses by FBW, Saurer and it's subsidiary Berna dominated the scene. However The PTT itself didn't buy any bonneted buses after 1954 concentrating mostly on right-hand-drive underfloor-engined Alpenwagens with the entrance behind the front axle. But real change started to happen in 1962 heralded by five of these much more conventional FBW front-entrance buses like this one bodied by Tuscher chosen to work the route which follows the railway along the Rhone Valley to Arbon. The conservative Swiss postal contractors however were still buying traditional bonneted buses as late as 1970. Until this time State owned Post Buses had carried silver roofs which looked most effective against the yellow black and red detail, but a more up to date but less effective cream top started to appear on these new generation buses which was a pity
Posted by christopher at 23:45