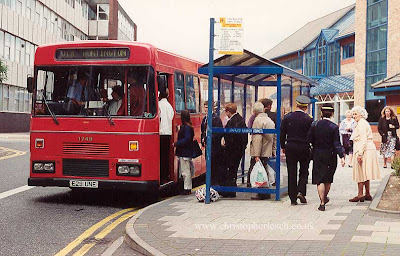 I thought this style of Alexander (Belfast) bodywork usually found in the Province but also supplied to Timeline of Wigan because of it's cheapness was very attractive in a functional kind of way and indeed they were a good buy as they were very rugged. But when Midland Red North attempted to revive the former BMMO Midland Red colours painting it's buses all-over red these Leyland Tigers in particular looked so boxy and utilitarian they acquired that nickname as the Bosnian Conflict was always on the news at that time. The companies buses might have looked better had they chosen the correct shade of red as the darker hue looked very drab especially in dull weather.
Posted by christopher at 02:19