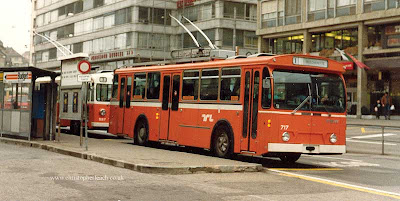 In the Seventies for some high-minded reason Switzerland decided to paint all it's town buses in this rather uninspiring brick-red orange colour with a white band which was not too unlike our awful poppy red Nation Bus Company garb.By the end of the Eighties tradition and civic pride had returned and most of the buses were to be found in either their traditional individual colours again or in a completely new livery such as at St. Gallen . However as in other towns like Baden and Olten, Lausanne decided to stick with that red instead of returning to it's former blue based colour-scheme. But as can be seen from the older trolleybus behind FBW No.717 a white top was added and the overall effect was quite attractive.
Posted by christopher at 14:27