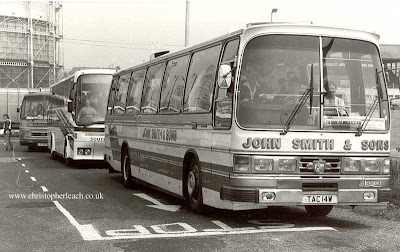 Opinions of the Tiger were often quite negative when compared to the highly popular Volvo B10M coach chassis, but the rugged and reliable Leyland Leopard on the other hand had plenty of fans. This vehicle had been in manufacture since 1959 and even though British Leyland halted production of those characteristic cat badges in 1970 a few smaller operators proudly transferred them to newer machines like this Duple bodied 1980 example belonging to John Smith and Sons. A Plaxton bodied Leopard belonging to Stevenson of Spath brings up the rear but sandwiched between them is an inauspicious looking European interloper belonging to South Yorkshire of Pontefract but who would have believed that he Bova Futura would still be in production today long after the once mighty Leyland has gone.
Posted by christopher at 15:58