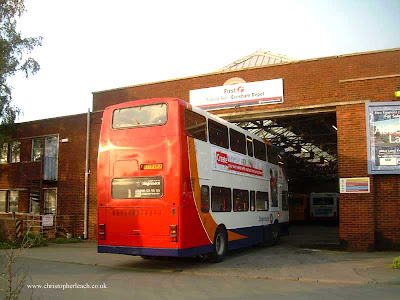 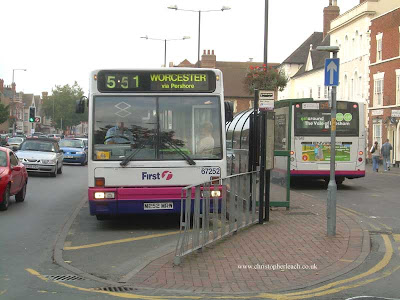 There had been a Midland Red Garage at Evesham since 1931 and even though I visited it many times in my pre-NBC spotting days I had not been back there for some years. So when I had the opportunity to pay a quick visit last Autumn even though all that there was left to remember the old company by was a few bricks I welcomed the chance to revel in a bit of BMMO nostalgia. It was good that I did for a few weeks later I heard the garage was about to close and the final nine buses would be moved elsewhere. Already most of the building have been partitioned off and sub-let but at least the old Midland Wheel Roundel was still proudly there above the entrance just showing underneath the newer First Bus sign. It was nice to see a double-decker there too, albeit belonging to Stagecoach for Midland Red employed them on the busier trunk routes especially to Birmingham. The reason for the Stagecoach visit was a broken upstairs front window no doubt caused by tree damage. First's buses might be modern and look a lot warmer than the old red BMMO's but anyone old enough to remember will agree they look positively grey and boring in comparison.
Posted by christopher at 04:42