Treat of a lifetime: Bern Automobilwerkstat 1964 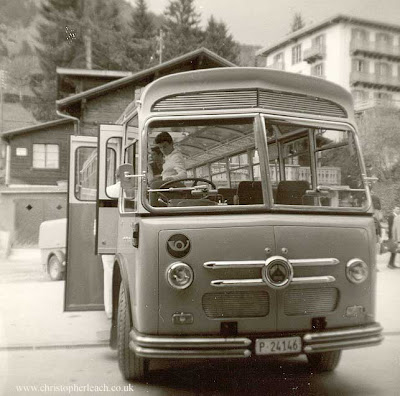 Well sadly it didn't happen till many years later but I would have loved to have seen it in it's busy heyday when in the winter months up to fifty of the PTT Swiss Post Bus fleet could be inside the main works being overhauled during the winter months. I had the opportunity to make a brief unofficial visit with our local driver who had to take our FBW C40U there to get it repaired after it overheated on a school trip to Bern. It would have made me a bit late for dinner and when I asked the teacher in charge if I could go and be a bit late he was angry and said I was a very stupid person and going out and being part of the group drinking a few beers was what I should be thinking of. Afterwards some of my classmates got permission to go off on their own and stupidly one of them sent a letter to his sister bragging that they had been in a bar where people had been smoking drugs and all hell let loose at the school when the parents found out. Serves them right don't you think, it's one of my biggest regrets in life and when I return to Switzerland as an adult it's only the buses I go to visit. Not surprisingly the teacher's pet was teacher's pet no more. As for the bus which we had to borrow for the return journey, it was almost new and it did not pass unnoticed as we snaked our way up the mountain road and through villages like Huemot. Farmers stopped working to wave and even cows stopped eating to stare with amazement. The Saurer has been at the Post Garage in Fluelen during the Summer for the Klausen Pass run but obviously it was overwintering at Bern as I have seen another photo. I took this view of the drivers chatting at Chesieres-Villars just before it left for Bern on the return of our P24001 several weeks later.
Posted by christopher at 12:20