Bringing you back: They've lost that Saurer Magic 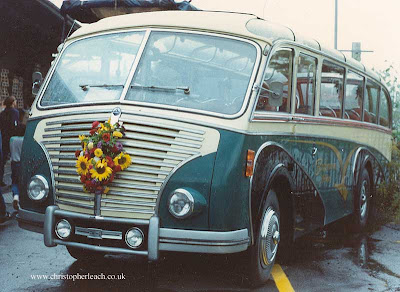 Strange isn't it how our tastes in fashion are changed by the pundits and design professionals and the old not so long ago derided tasteless look is now the coolest thing on two axles heading down Zurich's Bahnhofstrasse like this magnificent Saurer coach dating back to the early Fifties. But the new ones lack something because they are missing that smell of traditional quality and the sounds of polite coughing and Swiss precision engineering are replaced by the fuzz from a leaking personal stereo and the creaking of glued together plastic. This beautiful creature was seen at the Transport Rally held in the station forecourt at the tram terminus called Tiefenbrunnen in September 1990.
Posted by christopher at 15:44