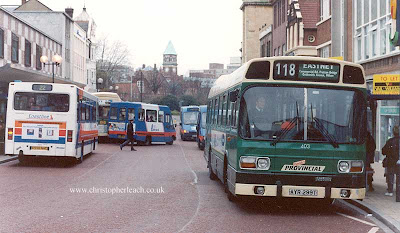 In 1992 a girlfriend used to travel the South Coast when she worked for a bowling alley chain and treated me to a day out with her when she visited Southampton, Portsmouth and Worthing. Although the weather was quite bright and sunny, being so close to Christmas the days were short and it was dark by the time we reached her last call. The best views were taken in Southampton but later as the afternoon rush started when the schools broke up for the day I wouldn't normally have wasted a lot of film but I had to make the best of the remaining light for there was a lot to photograph in Portsmouth including the buses belonging to Provincial of Gosport. On privatisation the old inky green livery had been revived and another reminder of the old pre-NBC days in the Sixties was the dependancy on second-hand stock, but there seemed to be a certain irony in the fact that once it's fleet which included Deutz-Powered rebuilds had been quite remarkable yet the current fleet of Leyland Nationals were so mundane but surprisingly they did not look at all out of place. Considering it was the first british bus to be built on a production line like a car and whose specification offering few design options it is gratifying to note how smart homely and individualistic it could look in differing types of livery.
Posted by christopher at 15:37