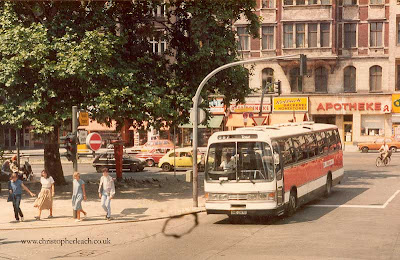 Even before the fall of the Berlin Wall visits to the city by British touring coaches were not uncommon but this Ribble Duple bodied Leyland Leopard PSU5 No.87 looked a long way from home as it passed through Neukoln in the now open city in the early Nineties. SND 287X dating from 1981 was originally with National Express West and so it's more recent role as a coach might have been a sideways move in it's career but as can be witnessed here it's new role could be a lot more exotic than chasing up and down the congested M1 and M6 Motorways.
Posted by christopher at 16:24