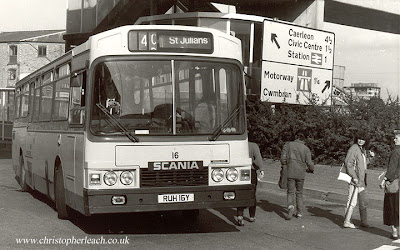 In the Seventies many operators were growing more dissatisfied with the choice and reliability of the vehicles they were more or less forced to buy off British Leyland and other manufacturers were keen to take advantage of this disquiet. MCW did a deal with Scania to build complete buses in the UK and Newport became a loyal Scania customer. Later buses included this batch of nine Wadham Stringer Vanguard bodied single-deckers. This combination was rare as the bodybuilders products were most usually found on non PSV buses belonging to the Police, Armed Forces, Social Services and the like.
Posted by christopher at 11:43