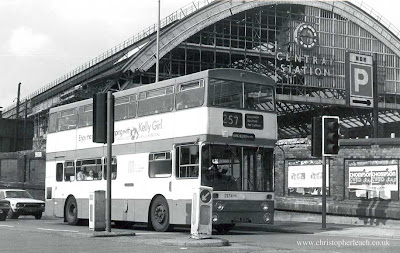 In the British Bus Industry the Sixties was an era of innovation that was largely led by the bus companies themselves and one of the important engineers was Ralph Bennett who made a name for himself at Bolton before moving down the road to Manchester before then finding himself in charge of the big one namely London Transport. He will be best remembered for how his influence revolutionised the design of the rear-engined double-decker which up to that point had largely meant bodybuilders moving the entrance to the front and sticking the engine at the back of their existing front-engined designs. His biggest contribution to Manchester was the introduction of the striking slab-sided driver only double-deckers which arrived in a crisp red and white livery similar to that found on a Embasy Cigarette Packet. However after SELNEC absorbed the Manchester fleet into the PTA and painted them into a rather undistinguished orange and cream livery they were never to look that good again. The company was later renamed Greater Manchester Transport after even more fleets were added but the orange colour prevailed until the eventual break-up prior to Privatisation. A Daimler Fleetline like most Mancunians with bodywork by Park Royal was caught passing the old Central Station in the early Eighties.
Posted by christopher at 15:43