Bournemouth: Britain at it's best 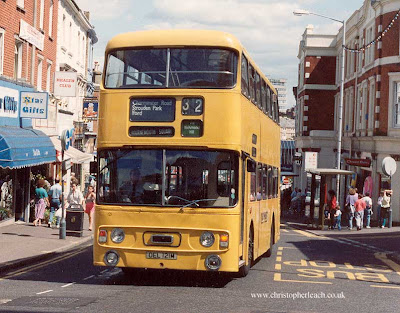 They're all quite different but Bournemouth is probably Britain's top quality traditional seaside holiday resort even if it is perhaps only the more balmy warmer climate that makes it score points over say Scarborough on the exposed East Coast or Llandudno in Wet Wales Also a huge plus was that until very recently the local council still operated it's own bus fleet in the town's traditional yellow colours including of course a number of Daimler Fleetlines and some dating from the days when British buses were still a very British affair. In 1992 Alexander bodied No.121 was Eighteen years old and still working hard for it's living.
Posted by christopher at 06:52